Meet The Groups from Season 4 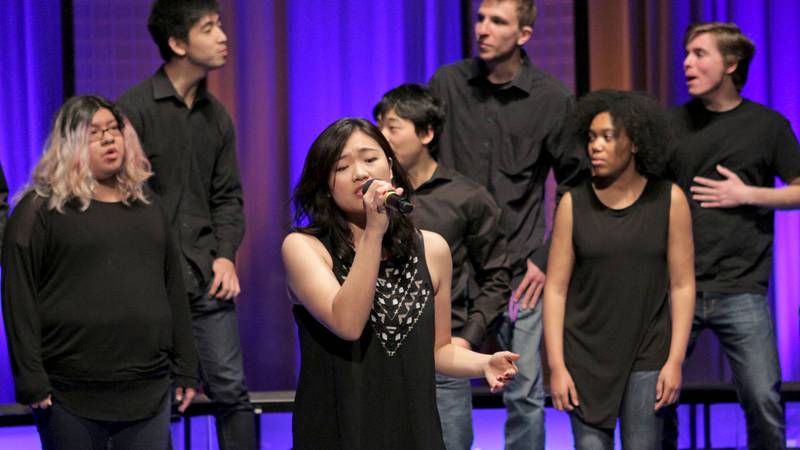 Founded in the 1920s, Amherst DQ is Amherst College's oldest co-ed a cappella group. Originally founded as an offshoot of the Amherst College Glee Club, the DQ prides itself on having musically and experientially diverse members. Amherst DQ arranges its own music, and its repertoire includes recent pop hits, old jazz standards, Disney tunes, and old DQ traditional songs dating back decades. Many people believe the group's name derives from a popular ice cream shop. In fact, it comes from a description of the group's original eight-member structure - a "Double Quartet." 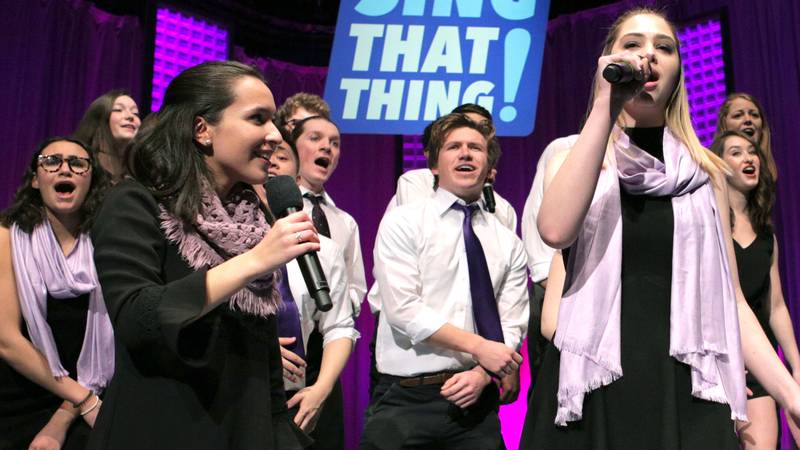 The Bates College Crosstones have been performing both in their home town of Lewiston, Maine and across the region for over twenty years. The oldest co-ed a cappella group at Bates College, the Crosstones are known for their down-to-earth nature, quirky humor, and eccentric performance style. The Crosstones are capable of performing music across genres ranging from pop to Motown and classic rock. In the past two decades, the ensemble has released two albums, toured around New England, and even made an international appearance in Canada. 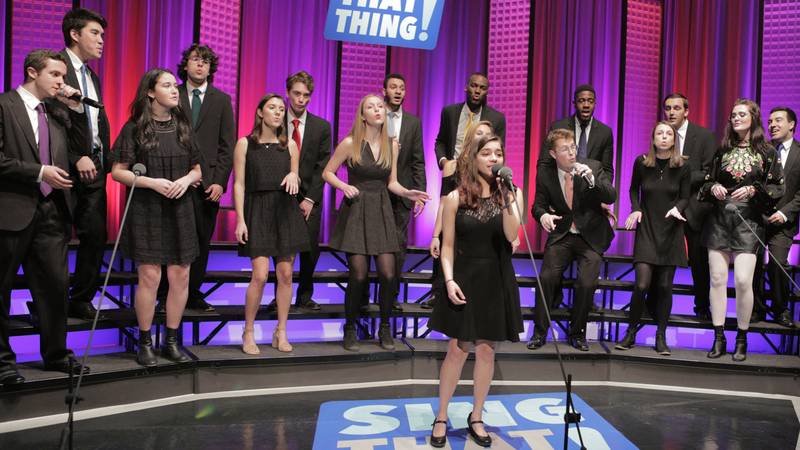 Twenty-five years after the group's debut performance, the Boston College Acoustics are as quirky, polished, and talented as ever. Throughout their storied and eccentric career, BC Acoustics have released a total of 10 studio albums. Their repertoire includes songs by Lady Gaga, The Beatles, and Adele. They also host an annual "Acapellafest" which raises money for The Morgan Center, a charity organization from Long Island that benefits kids with cancer. Boasting celestial voices, astronomic potential, and an extra-terrestrial mascot named Alfred, the Boston College Acoustics aim to abduct our hearts and probe our feelings with their music. 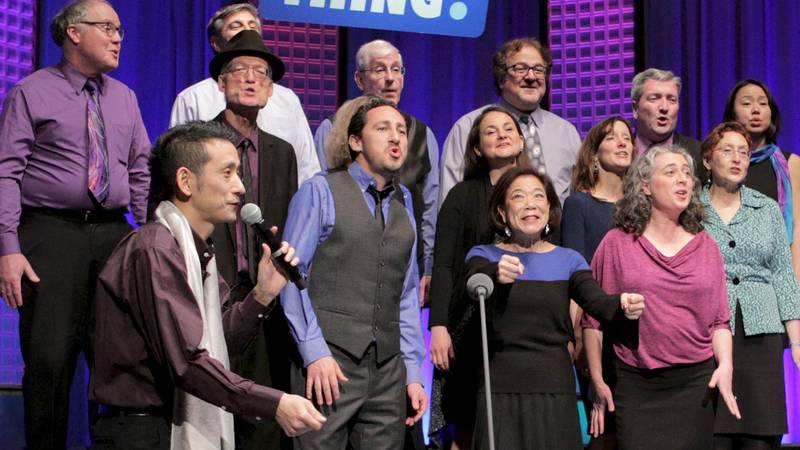 Boston Jazz Voices returns to Sing That Thing! with its 18-voice a cappella ensemble devoted to vocal jazz. Inspired by the arrangements of vocal music icon Gene Puerling, Boston Jazz Voices–led by Director Tsunenori "Lee" Abe–create stunning arrangements of classic and modern songs by adding swinging rhythms and unexpected harmonies that create a unique and rich sound. When they are not executing high-order harmonies and throwing down scats, members of the group work by day as doctors, teachers, lawyers, and engineers. For these singers, music is a way of balancing the demands of everyday life. 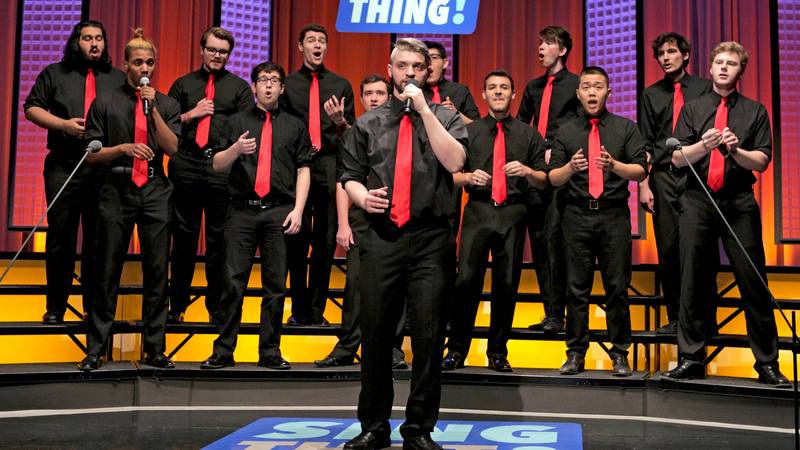 The CharlieChords came together in 2012 to share their love of singing unaccompanied music, spread their values of balance and blend, and avoid lugging heavy instruments. Self-proclaimed to be "the leanest, meanest, and Green(Line)est" all-male a cappella sensation at Berklee College of Music, The CharlieChords pride themselves on their original and unusual arrangements. The Charlie Chords placed second at the 2018 ICCA Quarterfinals. 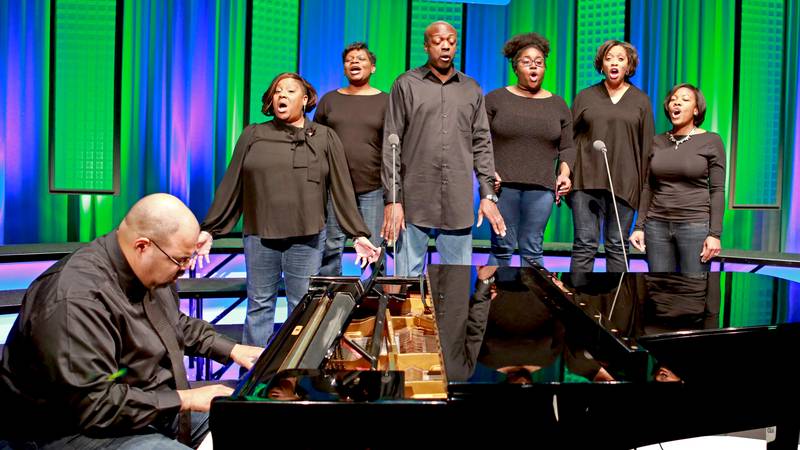 Confirmation returns to Sing That Thing! to further promote the joy and power of gospel music. First formed in 1999, Confirmation is comprised of members handpicked by choral director David Coleman. From prisons and libraries to the Democratic National Committee and Gillette Stadium, Confirmation can and will perform most anywhere for anyone willing to listen and be inspired. 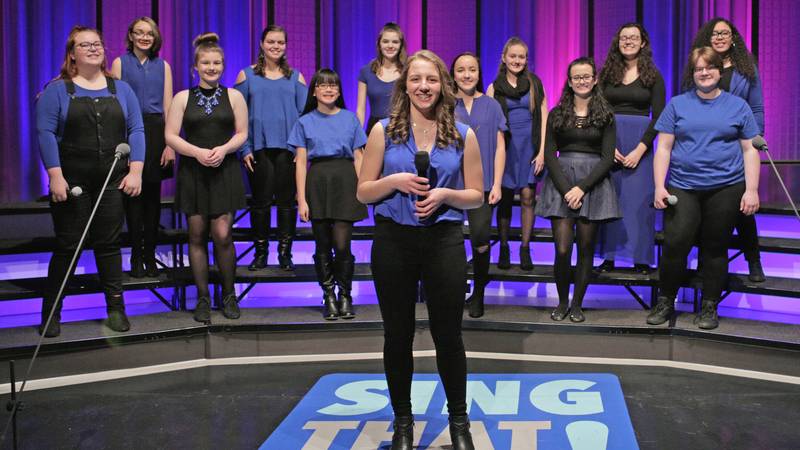 Named after singer-songwriter Ingrid Michaelson, Ingrid Sound is Danvers High School's award-winning all-female a cappella group. While inspired by Michaelson, the group performs music from a wide variety of artists, including Katy Perry and Sia. The ladies of Ingrid Sound have an impressive history of performance and competition. They won the 2016 Salem Pitch Trials, placed first in the 2017 NE Voices Festival, and performed at the National A Cappella Convention (NACC) High School Competition in Memphis, TN. Ingrid Sound hopes to make its Sing That Thing! debut memorable for our coaches and audiences alike. 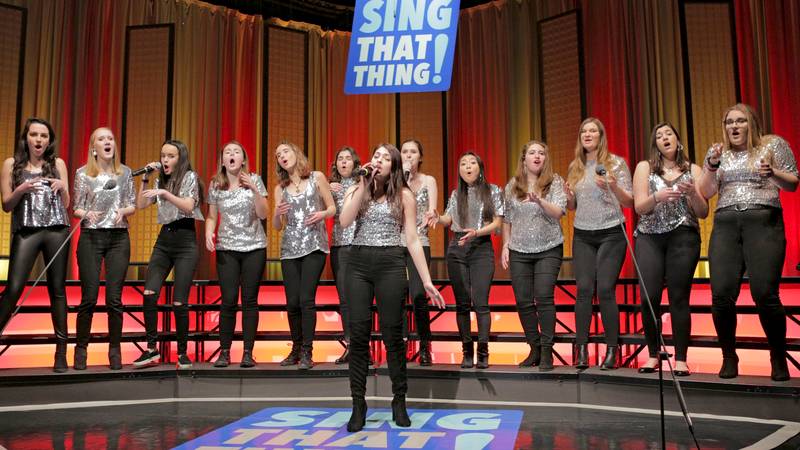 Luminescence is an all-female a cappella group from Marblehead High School. The group dazzled the crowd with their sparkly outfits at Governor Charlie Baker's Inaugural Ball in 2015 and most recently have released a joint EP, C105, with their fellow Marblehead High School a cappella group, The Jewel Tones. The group won awards for "best choreography" and "best solo-performance" at the International Championship of High School A Cappella and took 1st place at N.E Voices in 2014. 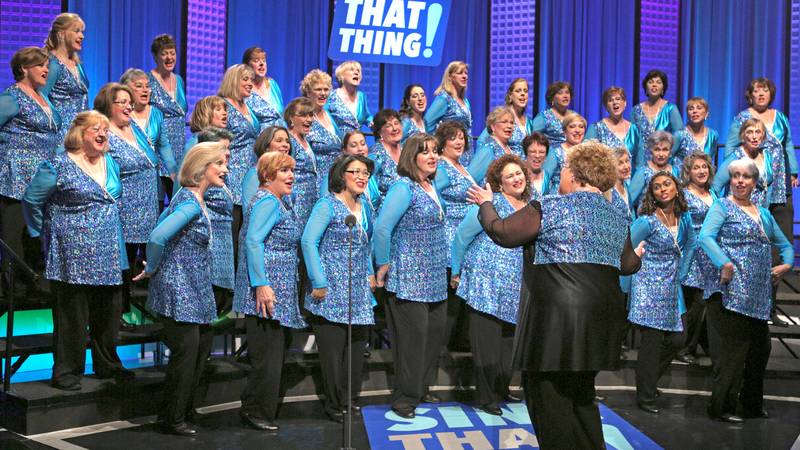 Merrimack Valley A Cappella is an award-winning chorus based in Wilmington, Massachusetts that performs throughout the Greater Boston area and southern New Hampshire. This is their second time on Sing That Thing! A chapter of Sweet Adelines International, this ensemble is a non-profit organization dedicated to educating women in the art of singing 4-part a cappella harmony. The group is directed by Eileen Gioe. The women of Merrimack Valley A Cappella focus on preparing high quality performances that combine energetic visual presentation, exciting vocal harmony, and lots of sparkle. 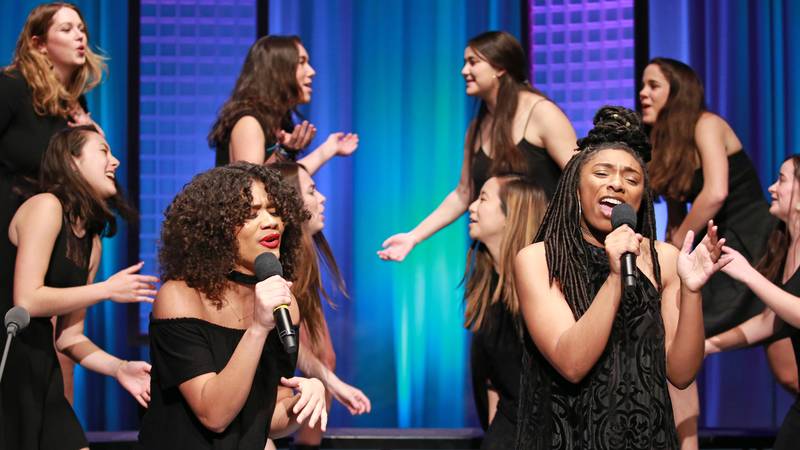 Established a year after the first full class of female students was accepted to Bowdoin College, Miscellania is Bowdoin's oldest all-female a cappella group and the definition of girl power. Since its inception in 1972, the ensemble has been an integral part of Bowdoin's a cappella scene. Miscellania got its name from an impromptu search in the "M" section of a thesaurus. Sometimes shortened to "Missy," the name proved perfect for an all-female group. You can catch these talented ladies rocking their signature black dresses at performances on Bowdoin campus and in the greater New England region. 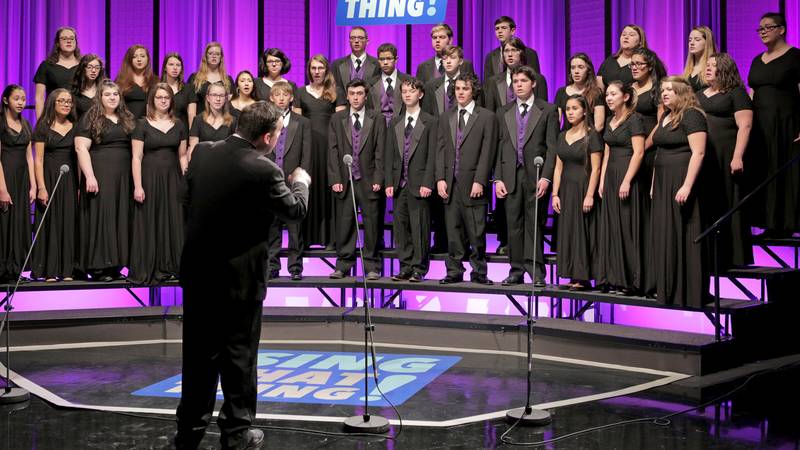 The Nashua High School South Concert Choir has a lasting reputation as one of New Hampshire's premier high school choirs. The purple-clad ensemble has received numerous awards and top scores at both state and regional levels and has had many graduates go on to top schools to continue studies in solo and choral singing. The group has no problem performing complex works, from "Carmina Burana" to Vivaldi's "Gloria" and "Chichester Psalms." Nashua HS South Concert Choir is eager to display their "Purple Panther Pride" on season 4 of Sing That Thing! 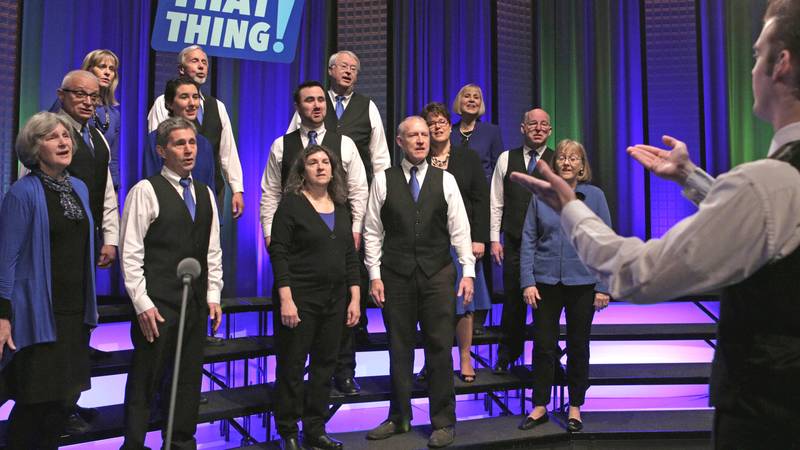 Oure Pleasure Singers is a small group of vocalists dedicated to the joy of making music. Originally founded in 1983 as a Renaissance and Madrigal ensemble, the group's name comes from the lyrics of a famous madrigal song, Sing We and Chant It, that was once the group's signature piece. While honoring their roots as a Renaissance choir, Oure Pleasure Singers has adopted a more eclectic musical repertoire ranging from vocal jazz to pop. The group prides itself on being close-knit and family oriented, with several pairs of spouses and other relatives singing together. 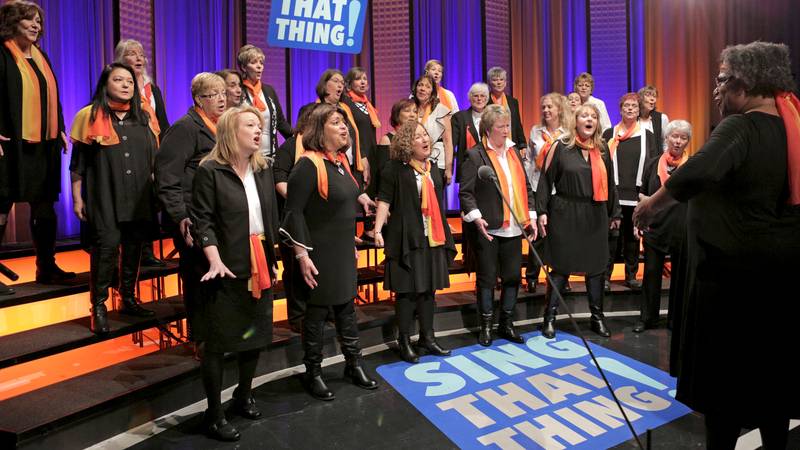 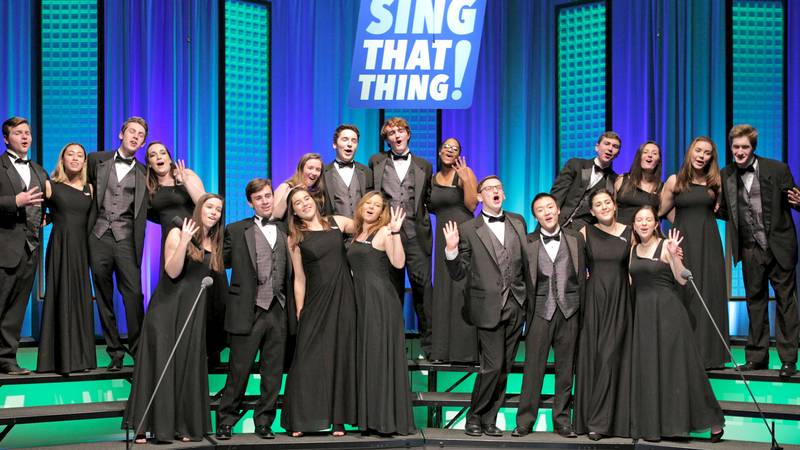 The Rice Street Singers return to Sing That Thing! to dazzle coaches and audiences alike with their robust, dynamic sound. A vocal jazz choir comprised of 20 of the 320 member Wellesley High School Choral Department, they are directed by Dr. Kevin McDonald. The Rice Street Singers have earned 9 consecutive Gold Medals at the Massachusetts Association of Jazz Educators Festival and were recognized by the National Association for Music Education as one of the top ensembles on the Eastern Seaboard. 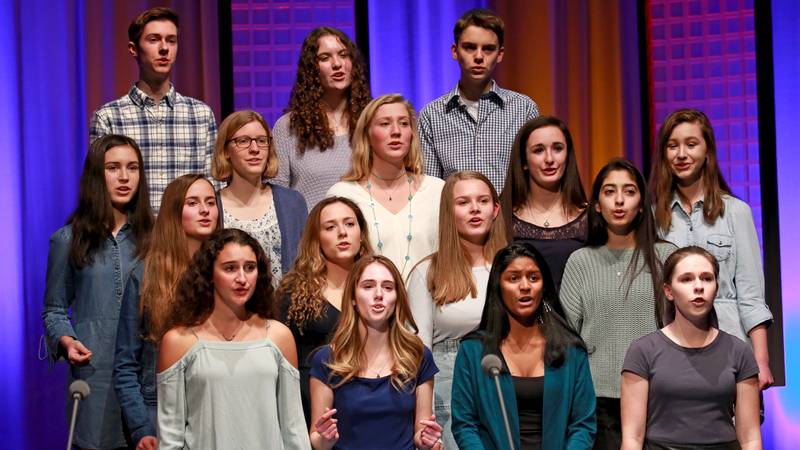 Appearing for the first time on Sing That Thing!, Pingree School Spectrum Vocal Ensemble is a mixed-voice group that performs a wide variety of musical styles and genres. Spectrum Vocal Ensemble regularly performs at school and community events but has recently taken to participating in peace concerts and charity performances. The group works alongside beneficiaries such as "Express Yourself," a non-profit organization designed to bring music and musical programs to underserved communities. 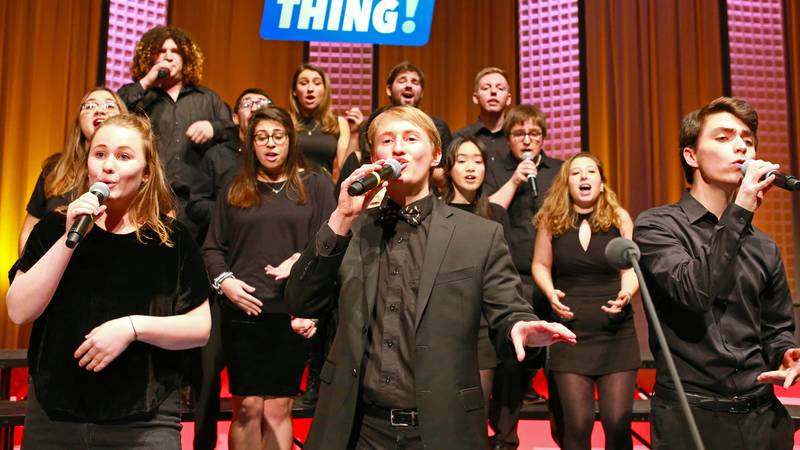 Starving Artists is the hungriest co-ed a cappella group on Brandeis University's campus. Rocking original arrangements, awe-inspiring riffs, and mouth-watering choreography, the group has quickly become one of the savoriest groups on Brandeis' campus. Celebrating its twentieth anniversary, Starving Artists come to Sing That Thing! with an appetite for victory. When Starving Artists are not performing in competitions, they participate in charity events such as "Will Sing for Food" an annual fall concert that collects food and non-perishable items for local food shelters. 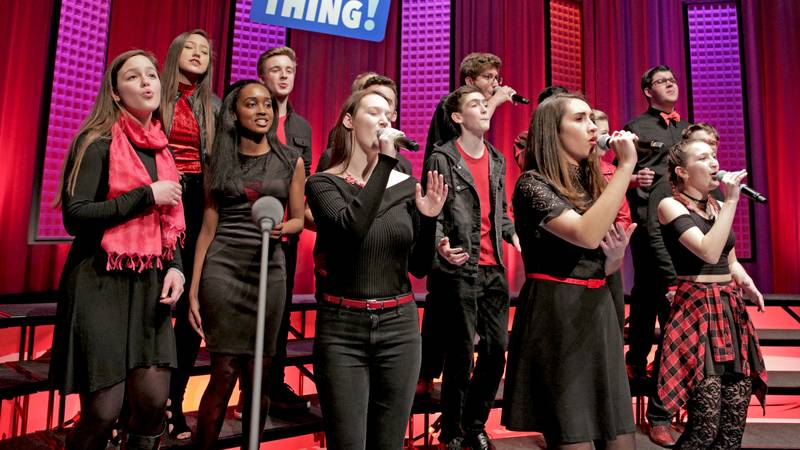 Appearing for the second time on Sing That Thing!, The Thursdays, directed by Amanda Roeder, are an a cappella group from Chelmsford High School. The Thursdays began as a jazz choir, but through a unanimous vote they decided to make the move to a cappella. Veterans of competition, they have performed throughout the Northeast. Their achievements include a top-three finish at N.E. Voices and an invitation to represent the Northeast at the International Championship of High School A Cappella (ICHSA). Contrary to popular belief, The Thursdays actually rehearse on Tuesdays. 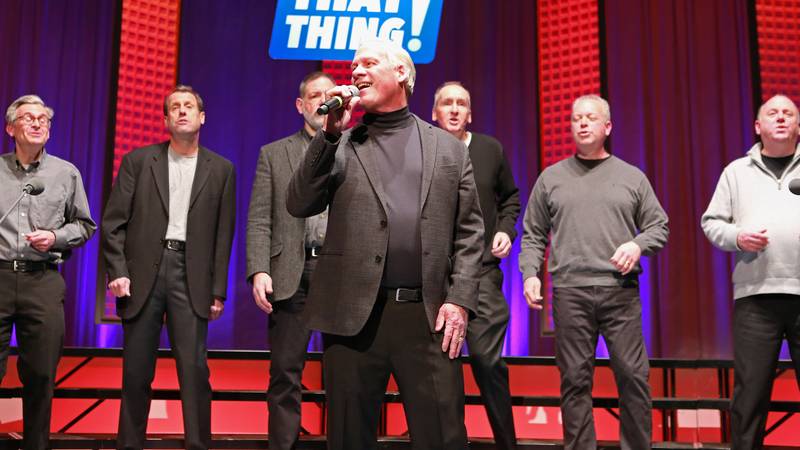 In the misty dawn of 2009, an ancient race of singers known only as "Hengemen", came together to perform oddly likable songs and clever harmonies. Since its formation, Tonehenge has prided itself on rock-solid vocals and steadfast choreography. Tonehenge has brought its heavy sound and hefty presence to a Lowell Spinners game, the annual "A Cappella Defeating Cancer" event to benefit the Wellesley Cancer Prevention Project, and now to the Sing That Thing! stage.

Sing That Thing! is a production of

Special Thanks To Co-production Stations

With additional funding from Eran and Yukiko Egozy